Reading the translated works of Dr. Maria Montessori can be an intimidating prospect. Language barriers, academic terms, and generational differences all contribute to a reluctance on the side of Montessori-inspired parents to read Dr. Montessori’s own books rather than modern guides to Montessori.

If you’re ready to get into the “meat and potatoes” of Montessori, reading her own works, and understanding how the Montessori Approach views the whole child, I invite you to join Marie Mack of Child Led Life and I on a book study of The Absorbent Mind. 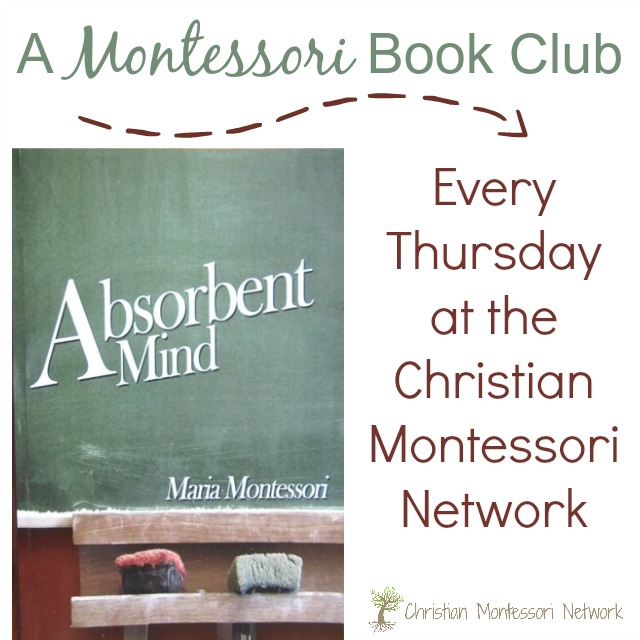 The Absorbent Mind is a collection of lectures given by Dr. Maria Montessori, the founder of the Montessori Method, which were revolutionary in their time, but are still relevant today. Sometimes, while reading The Absorbment Mind, I am struck by how outdated some mindsets towards children were, but if we step back and take an honest look at our current culture and it’s attitude towards the treatment and development of children, we might realize that (as a greater culture) we still have much to learn from Montessori.

For example, we often still hear of children as blank slates, but what God, Montessori, and modern developmental research tell us is that children are born into the world perfect and with individual personalities, preferences, and purposes. We are here to facilitate their natural absorption, assimilation, and ordering of information.

The Absorbent Mind is a great read for those who are interested in getting to the “heart” of Montessori education and it’s views of the child. I think it is very important to know right from the start if your views are aligned with Dr. Montessori’s before you start implementing it’s practices into your home, so that you can understand the reasons why things are done a certain way, and dismiss the things that don’t align with your goals for your family.

Our book study officially starts in two weeks, but today I’m going to request that you try to seek out the book and read the Introduction and First Chapter (The Child and World Reconstuction). There are a few free copies of the book available online:

Every week we will give you a list of questions or background information to aid you in your reading of the next 2 chapters of the book. I know when I say “2 chapters” it can seem like a lot, but these chapters are short, so three chapters usually runs less than 40 pages total.

November 13th, 2014: Chapters 4 and 5: A New Orientation and The Miracle of Creation

December 18th, 2014: Chapters 7 and 8: the Psycho-Embryotic Life and the Conquest of Independence

Break for Christmas and New Years

January 22nd, 2015: Chapters 11 and 12: The Call of Language and Obstacles and their Consequences

February 5th, 2015: Chapters 13 and 14: Movement and Total Development and Intelligence and the Hand

February 19th, 2015: Chapters 15 and 16: Development and Imitation and From Unconscious Creator to Conscious Worker

March 5th, 2015: Chapters 17 and 18: The New Teacher and Further Elaboration through Culture and Imagination

March 19th, 2015: Chapters 19 and 20: Character and its Defects in Young Children and A Social Contribution to the Child: Normalization

April 2nd, 2015: Chapters 21 and 22: Character-building: A Conquest, not a Defense and the Sublimination of Possessiveness