Part Two of Day Six of the Creation Series

I’m really excited to share part two of day six of the Creation Series with you today! To read part one, please visit – Hands-On Learning about Animals. I think day six is one of the most exciting days of the Creation week, because this is the day that man and woman were created by the hand of God. Day six of Creation is also a wonderful way to introduce the study of human anatomy to your child. I appreciate that God took quality time to create Adam and Eve – two unique human beings like no one else on this earth. God created life and set the re-creation of life into place so that I could be alive today. I praise Him for that!

The Word of God

“And the Lord God formed man of the dust of the ground, and breathed into his nostrils the breath of life; and man became a living being.” Genesis 2:7

God Formed Man from the Dust of the Ground

The Bible says that God formed man of the dust of the ground. To help my child understand this part of the Genesis story, I placed a play dough printable mat of a human body in the bottom of a letter box filled with white sand. I wanted to create a hands-on activity to show how God formed man from the dust of the ground. I imagine God may have drawn an outline of Adam in the dust before forming him into a three dimensional being. I believe that God took pride in His work and joy at each special feature that was unique to Adam, just like an artist painting a portrait. 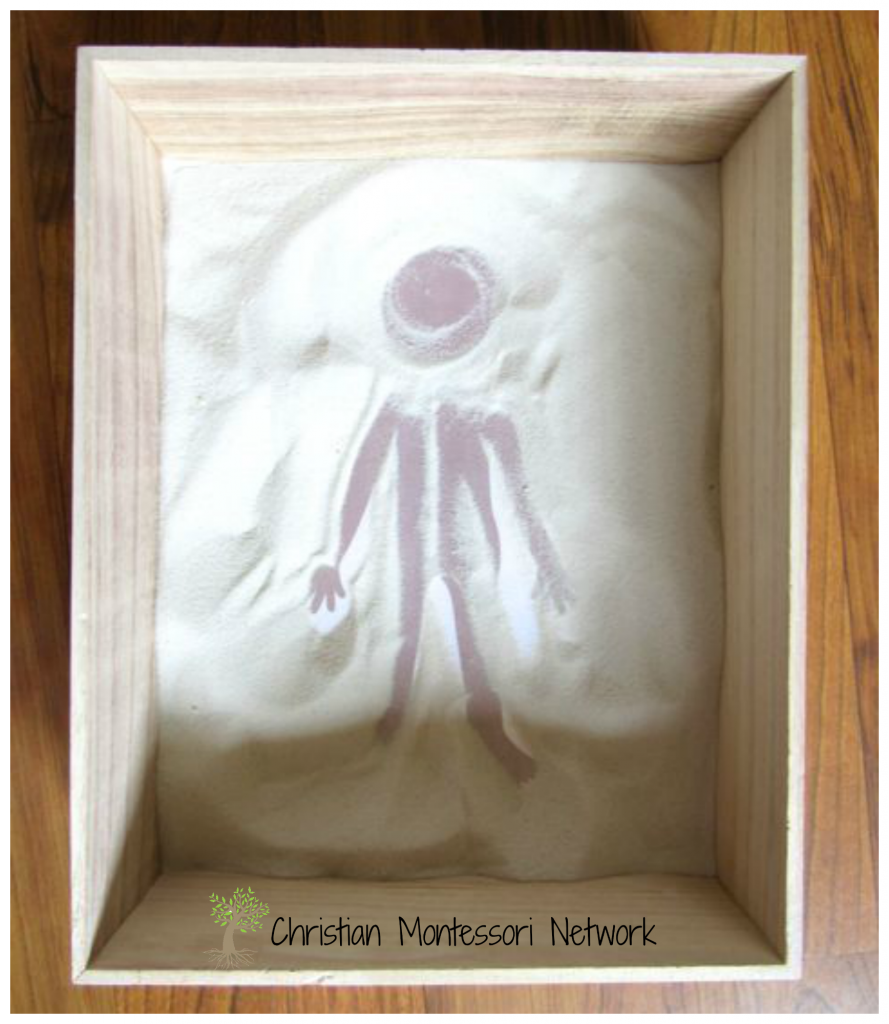 Man Formed in the Image of God

The Bible says that God “formed” man into His own image. I love the thought of being formed in the image of God! That means that we must look something like Him and that He looks something like us. 🙂 To help my child understand what it meant for God to form a human being, we used these wonderful play dough mats with flesh toned play dough to form our own human replicas. I presented three different skin tones to my child and taught him that God loves all the colors of human beings. 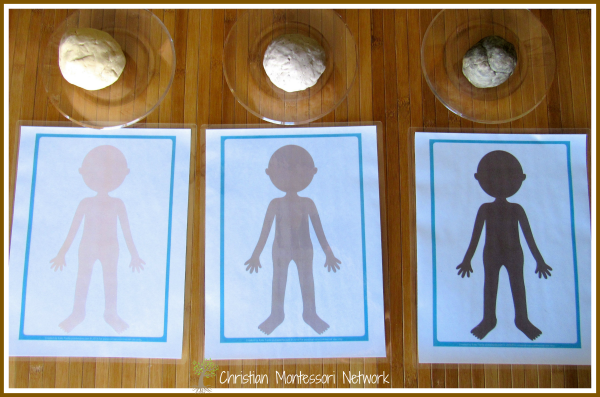 We also used these External Parts of the Body three-part cards as a guide while forming the different parts of the human being. We formed the body in the following order – head, ears, torso, arms, hands, legs, and feet. I named each body part as we formed them into existence. 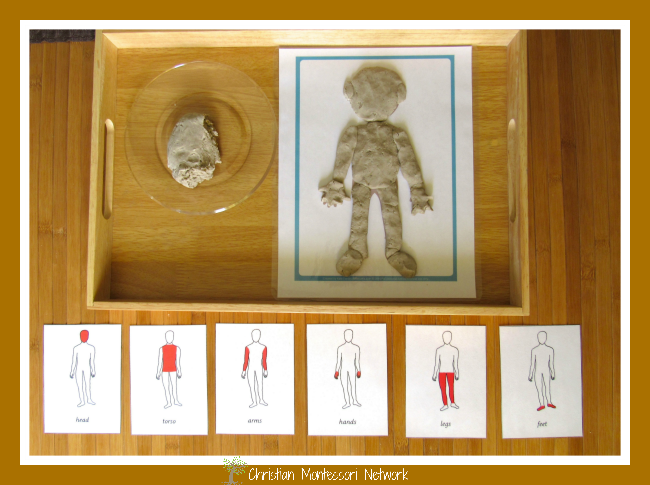 The Breath of Life

The Bible says that, “God breathed into his nostrils the breath of life and then man became a living being.” The man was not alive until God breathed into him the breath of life. To illustrate this part of the Genesis story to my toddler, I put a round mirror into the freezer. Then I took one out and let my toddler blow his breath onto the mirror. He was able to see his breath this way. We talked about how God breathed life into the first human being and how He also gives us the blessing of breathing everyday. 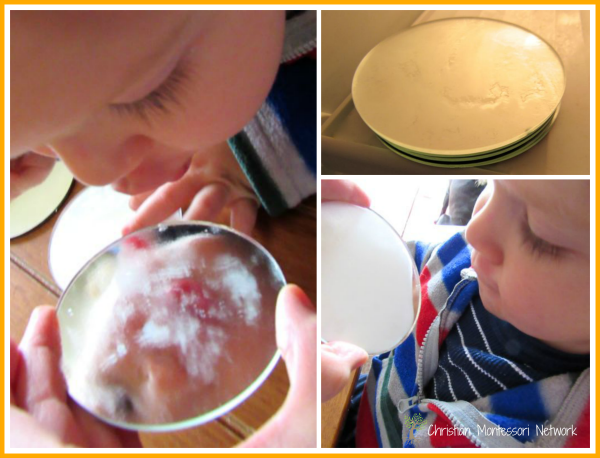 The Creation of a Woman

“And the Lord God said, It is not good that man should be alone; I will make him a helpmate for him. …But for Adam there was not found a helper comparable to him.” Genesis 2:18-20

“And the Lord God caused a deep sleep to fall on Adam, and he slept; and He took one of his ribs, and closed up the flesh in its place. Then the rib which the Lord God had taken from man He made into a woman, and He brought her to the man.

“This is now bone of my bones
And flesh of my flesh;
She shall be called Woman,
Because she was taken out of Man.”

Therefore a man shall leave his father and mother and be joined to his wife, and they shall become one flesh.” Genesis 2:21-24

This is such a beautiful part of the Genesis story – it is the story of the first marriage on earth. God gave Adam a special kind of anesthesia (put him to sleep) and then performed the first surgery. He took one of Adam’s ribs and with that he formed a woman – Eve. To give a hands-on illustration of this part of the story, I presented my toddler with a model of a skeleton, a child life-sized floor skeleton puzzle, and three-part cards with a focus on the ribs. I talked to my toddler about the skeleton and how a skeleton is a part of each of our bodies. I pointed to the ribs on the cards and then we touched our ribs on our own bodies as well. 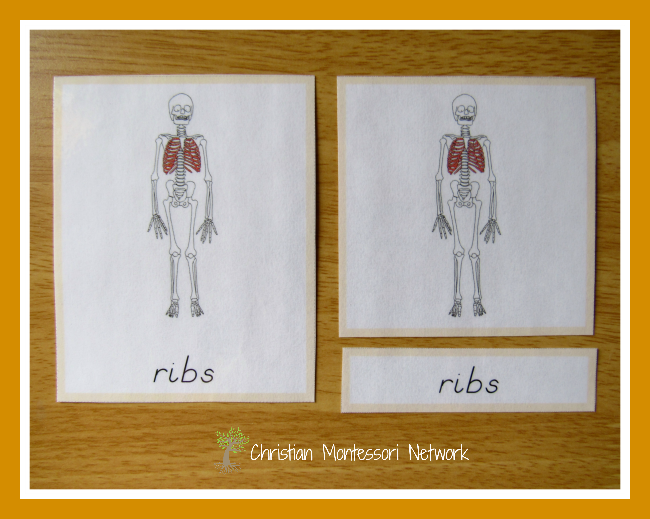 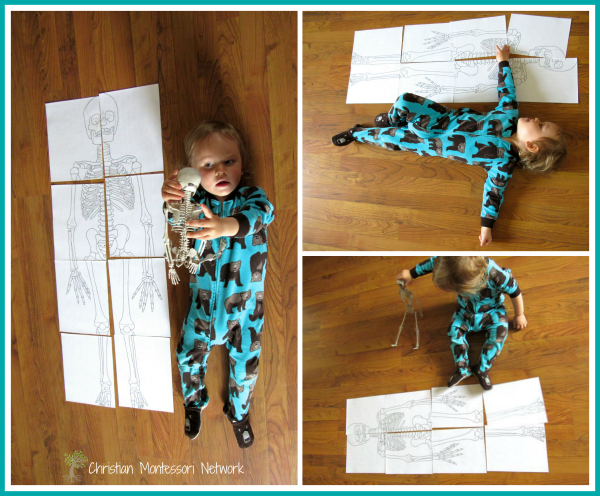 We also discussed how God formed each part of the human body – skeletal system, muscles, nerves, organs, and skin. I love this cute anatomy puzzle by Melissa and Doug. It also has the anatomy for a boy and a girl. I thought that was great for explaining the part where God made both a man and a woman.

Here is a fun and creative DIY human body foldable book for your child to color, cut out, and then glue onto paper. It is a simple “stick” like drawing of each part of the human body, which is lovely for a young child to begin understanding the layers of the body. 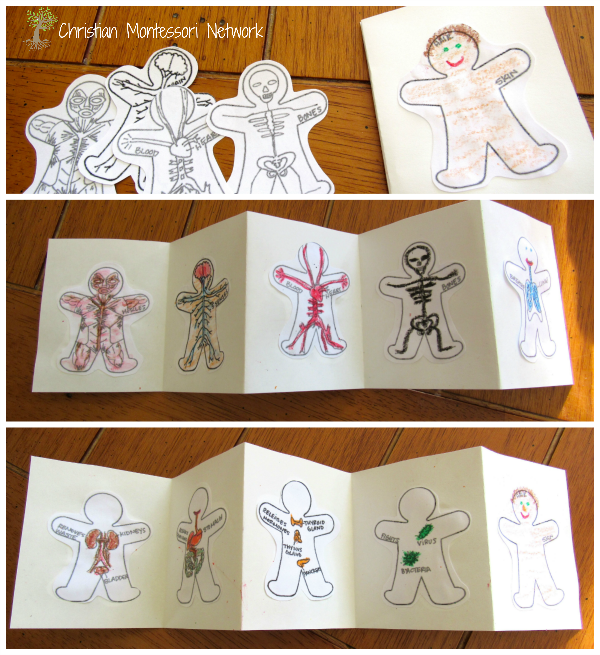 You may also enjoy – 20 Hands On Bible Lessons for Kids.