You are here: Home / Godly Play / Why I Love Godly Play by Megan Cottrell

We are excited to have one of our lovely Christian Montessori Network Facebook group members, Megan Cottrell, guest blog with us today on Why I Love Godly Play. Megan is an accomplished writer and will be with us for the next weeks sharing all her wonderful knowledge on Godly Play. Check back next week for more great Godly Play conversation. ~Marie

Why I Love Godly Play

I’ve never been big on Christian education. I mean, it’s not that I think young children shouldn’t learn about God, but I never wanted to be a part of it. At our last church, I told our Family Ministries director, “You can ask me to help with anything and I’ll say yes, but don’t ask me to help with VBS.”

I never, ever thought I’d be a Sunday School teacher, but I’ve learned God is like that – you say “never, ever,” and you’ll probably end up there someday. It wasn’t until I became interested in Montessori education for my young son that I came to appreciate a Montessori-style Christian Education curriculum called Godly Play. I started volunteering in a Godly Play classroom at our church to get more exposure to a Montessori-style classroom, not thinking I would ever want to teach it. Again, God had surprises in store for me.

I quickly fell in love with Godly Play. I became a Godly Play teacher and went through the official training. And now that we’ve moved to another city, I’m desperately searching for a church that does Godly Play, not only for my son when he’s ready, but for myself!

So, what is this crazy thing called Godly Play? Godly Play is a Christian education curriculum written by Episcopal priest Jerome Berryman. As a student at Princeton Theological Seminary, he became frustrated with the lack of thought about the role of children in the church. Children, it seemed, were just empty vessels waiting to be filled with Christian ideas and not really able to contribute to church life until they were older.

So, Berryman researched Montessori’s methods and tried applying her concepts to a spiritual development curriculum. Over the course of 20 years, he designed Godly Play as a way of introducing Christian language, stories and ideas to children.

Here are the basics: Godly Play is a weekly program for kids age 3 through 12 (although many adults enjoy participating too!). A Godly Play classroom is filled with beautiful materials designed to tell the stories of the Bible. Each week, the teacher shares a story from the Godly Play curriculum – commonly an Old Testament story, parable, New Testament story or a lesson about church life – using these materials. After the story, the teacher and the children engage in “wondering” – a time where the teacher asks questions about the story, like “What part of the story did you like best?” or “Where are you in this story?” The teacher then invites each child to work in response to the story – like playing with that week’s lesson, another lesson they’ve heard or through art materials. After their work, children come back together to share a “feast” – a snack shared together that mirrors the idea of communion.

Godly Play hits on important Montessori concepts: beautiful, hands-on materials, respect for the child, a quiet classroom designed to help children focus, the importance of meaningful work, and the ability of the child’s mind to absorb ideas and concepts easily and fluidly.

So what makes me so crazy about this program – even me, a VBS-hating, Sunday School snob? Here’s 5 reasons why I think Godly Play is important for children:

Although Godly Play is designed to use in a church setting, it can definitely be implemented at home as well! In future posts, I’ll be sharing how a Godly Play lesson works, some ideas on how to learn the curriculum, make your own materials and share these beautiful stories with your children at home.

So, now that you’ve heard about Godly Play, what questions do you have about it? What do you want to know more about? Tell me what you’d like to know so I can best serve you and your family in future posts. You can find me in Christina Montessori Network Facebook group or you may comment below! 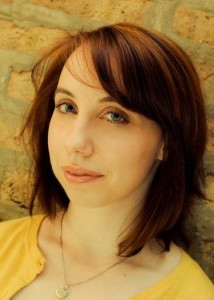 Megan Cottrell is a mama, writer and journalist who lives in Grand Rapids, Michigan.

Megan’s life changed as a Christian when God spoke to her through a summer-long internship on the Westside of Chicago where she learned about God’s heart for the poor. She spent six years writing about race, housing and poverty in the city and was awarded the Studs Terkel award for writers who capture profoundly human stories.

Megan attended a Montessori preschool, but didn’t become formally interested in Montessori education until her son, Teddy, was born in 2012. Through her interest in Montessori, she fell in love with Godly Play, a Montessori-based Christian education curriculum, and has been a Godly Play teacher every since. She and her son work on Montessori-inspired activities at home daily, and she loves to watch him grow in independence and curiosity.

Marie is a work-at-home mother of two. After much self-study and with a background in education, she chose to follow her own children in their education and created the blog Child Led Life. She is also the owner of Montessori Bloggers Network. Marie is a baptized Catholic turned Methodist, but currently attends a church affiliated with the southern baptist convention. She enjoys contemporary services focusing on the community of believers and loves meeting God in the great outdoors.