A paper craft activity using shapes and preschool scissor cutting skills for, "i is for the image of Daniel 2." This is part of the ABCs of the Bible Craft series.
You are here: Home / Bible Lessons / I is for Image of Daniel Chapter 2

We’re on letter “I” for our ABCs of the Bible crafts, a great series of Bible School Craft Ideas.

The letter “i” can be a tricky letter to think up a fun Bible kid craft and I was thrilled when I thought of, “I is for Image of Daniel Chapter 2.” The stories in the book of Daniel are always so mesmerizing to me. I have always loved the story of the dream about the image of gold, silver, bronze, iron, and clay that only Daniel was able to interpret for the king of Babylon. 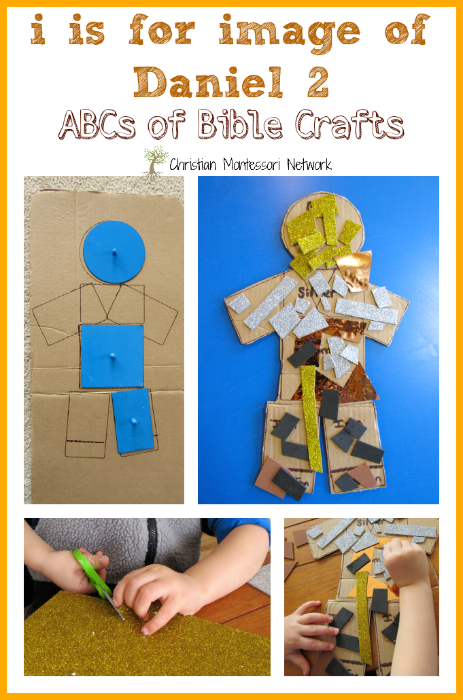 The story of the image can be found in Daniel Chapter 2 (NKJV):

1. Now in the second year of Nebuchadnezzar’s reign, Nebuchadnezzar had dreams; and his spirit was so troubled that his sleep left him. 2. Then the king gave the command to call the magicians, the astrologers, the sorcerers, and the Chaldeans to tell the king his dreams. So they came and stood before the king. 3. And the king said to them, “I have had a dream, and my spirit is anxious to know the dream.”

16 So Daniel went in and asked the king to give him time, that he might tell the king the interpretation. 17 Then Daniel went to his house, and made the decision known to Hananiah, Mishael, and Azariah, his companions, 18 that they might seek mercies from the God of heaven concerning this secret, so that Daniel and his companions might not perish with the rest of the wise men of Babylon. 19 Then the secret was revealed to Daniel in a night vision. So Daniel blessed the God of heaven.

27 Daniel answered in the presence of the king, and said, “The secret which the king has demanded, the wise men, the astrologers, the magicians, and the soothsayers cannot declare to the king. 28 But there is a God in heaven who reveals secrets, and He has made known to King Nebuchadnezzar what will be in the latter days. Your dream, and the visions of your head upon your bed, were these:

31 “You, O king, were watching; and behold, a great image! This great image, whose splendor was excellent, stood before you; and its form was awesome.32 This image’s head was of fine gold, its chest and arms of silver, its belly and thighs of bronze, 33 its legs of iron, its feet partly of iron and partly of clay.34 You watched while a stone was cut out without hands, which struck the image on its feet of iron and clay, and broke them in pieces. 35 Then the iron, the clay, the bronze, the silver, and the gold were crushed together, and became like chaff from the summer threshing floors; the wind carried them away so that no trace of them was found. And the stone that struck the image became a great mountain and filled the whole earth.

Materials Needed for the Image of Daniel Chapter 2:

The first step that we did in creating the image of Daniel chapter 2 was to cut out pieces of the gold, silver, bronze, black and brown paper. This activity encourages preschool aged cutting skills and creativity. There is no particular way the child needs to cut out the paper. He can cut as many big or little pieces as he desires. If you want to make the cutting process easier, the paper can be cut into strips for the child to hold and cut apart. 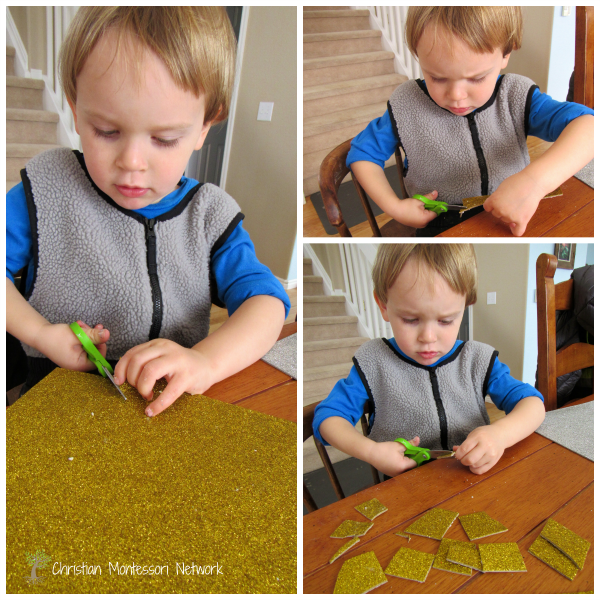 After that I cut out the cardboard image. *Please note: an older preschool or kindergarten aged child could trace the shapes onto the cardboard and label the parts of the body themselves. 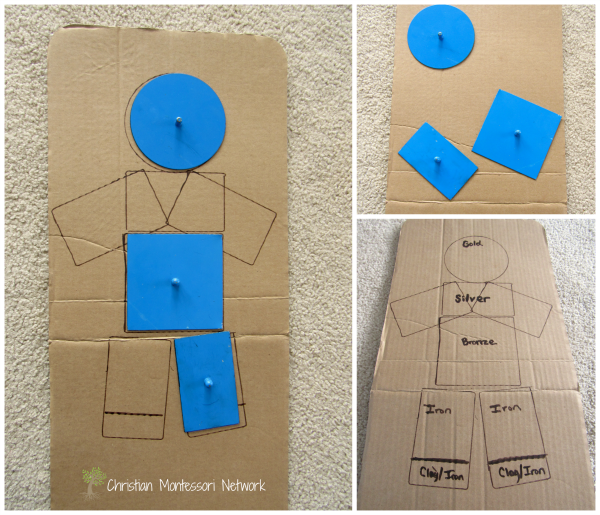 I presented the cardboard image to my three year old and glued one piece of the colored cut out paper onto each section as a guide. My child began to put the various pieces of colored paper onto the image. Sometimes, he followed the “guide” of colors and sometimes he did his own design. I didn’t correct him. I allowed him to use the glue and attach the colored paper as he wished. 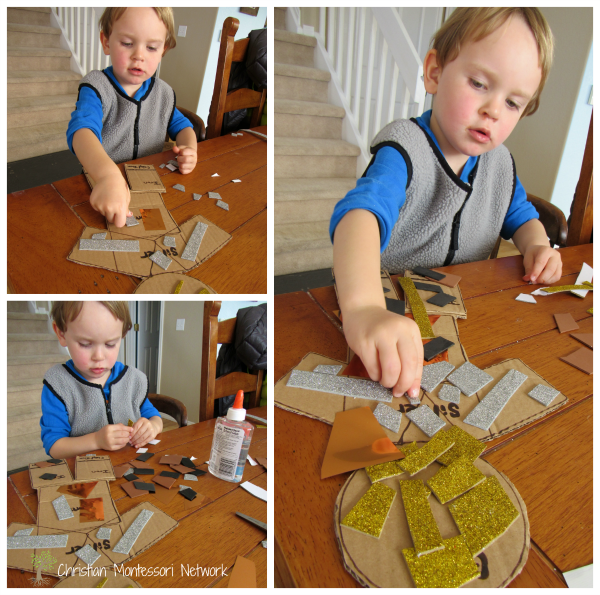 i is for image of Daniel Chapter 2

Here is the finished masterpiece of the Image of Daniel Chapter 2! 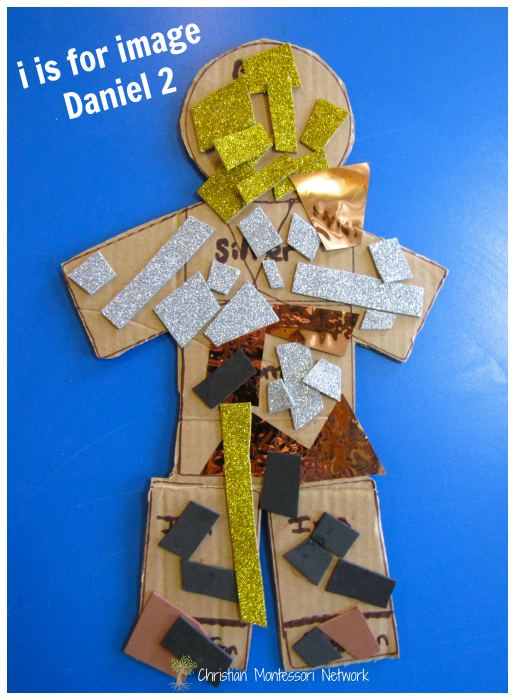 If you liked this ABCs of the Bible craft idea – I is for Image of Daniel Chapter 2 – be sure to pin it for later, or share it with your friends if you think they’d enjoy doing it with their children.